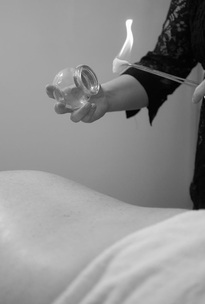 Chinese fire cupping is a method of treating disease that is caused by local congestion in areas in the body.
A partial vacuum is created in a glass cupping jar, by the use of a fire heat source. Then the cup is directly applied to the skin surface. The underlying tissue is drawn up into the glass jar. If there is an acquired amount of stagnation and congestion, then an area of blood stasis will appear. This appears as a bruise in the shape of a ring. The bruise marks will vary in colour, and the amount of red, dark red or purple, will depend on the degree of stagnation. Dark blood is a sign of stagnation, which in many cases in modern terms is the amount of toxins in the blood. Cupping marks will fade away over approximately a week.

Additional Cupping Techniques:
Sliding Cupping
A lubricant such as arnica oil, or olive oil is rubbed into the area (generally the back). The cups are placed on the desired treatment area, and the lubricant then allows the practitioner to move the cups using a massage technique.
Fast Cupping
In this technique, the cups are quickly moved from place to pace along the spine. This is a good method where there is a large area of tension.

Tuina is a Chinese massage technique that uses kneading, pressing, rolling, shaking and stretching of the body.
Tuina is focussed on regulating qi (vital energy) and blood flow within the body. This technique improves the function of tendons, bones, joints and brings relief to body aliments. 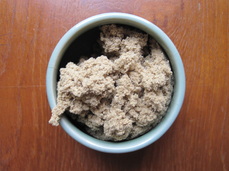 Moxa is a dried herb call mugwort, that comes from the chrysanthemum family.
Moxabustion is a technique that originates in China and was introduced to Japan more than a thousand years ago. This technique is used commonly in TCM Acupuncture and certain Shiatsu Therapists will incorporate it into their practices.

In my shiatsu practise, direct moxibustion is applied by using a small amounts of the rolled moxa cone, the size of a sesame seed or half of a grain of rice. Shiunko cream is placed on the skin surface of the desired acupressure point. Then the seed of moxa is placed on the point and burned with an unscented stick of incense. The result is an intense, penetrating heat that stimulates the acupressure point involved without being uncomfortable for the client.
Powered by